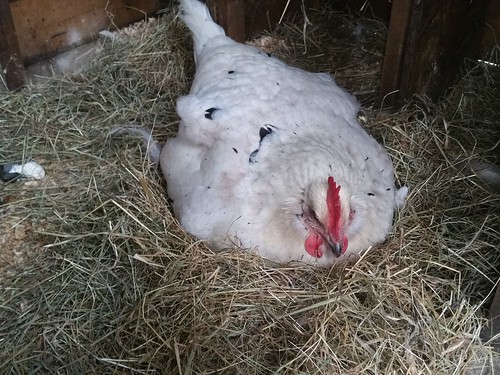 Last week, I noticed that our mother hen, Betty, was behaving oddly. She spent a lot of time preening herself and was scratching in places where there was nothing to scratch... she was also spending an increasing amount of time in the coop when she laid her egg each day. She appeared distracted, a bit giddy and "on edge". Then, one morning, I found her in the coop, all spread out on what looked like a nest and in a sort of trance! I knew then that she was broody. I read up all sorts of information about it and what to do; I asked for advice on Smallholder forums and talked to my neighbour. Not keen on "breaking the broodiness" by setting up some sort of "chicken jail", I opted to search for some fertile eggs to give her and see if she was serious about wanting some chicks! A post on a local Facebook group and there I was making arrangements to collect 6 fertile eggs for her.

The longer I work as a smallholder, the more I realise that there is a tension between what is easiest/best for me the smallholder and what is easiest/best for the animal. Not just with chickens, but I have encountered this with sheep too as some practises are clearly there to help the keeper rather than the sheep (eg tail docking). I tend to question why something is done and will rarely accept "we've always done like that" without a scientific or evidence-based reasoning. Don't get me started on the routine use of antibiotics as a preventative method!! As a livestock keeper, I want to do right by them by interfering the least and on our small scale, we can do that. Hearing what people do about broody hens when they don't want to have broody hens, it was clear to me that I much prefer to work with what is natural to the animal. Indeed, there is inconvenience for me as we won't get so many eggs now and we need a plan for the chicks when/if they hatch by the end of the month. But we are not running a commercial operation here and we can cope with the decrease in egg production. This is also a learning opportunity for us as we have never hatched chicks before.

I fetched six fertile eggs for Betty and put them under her. She protested a bit and left the coop for a while to have a quick drink, eat and poo. I discovered that she had been sitting on two of her eggs and three others that she had stolen off the other hens!

A week on from all this, Betty religiously sits on her nest for most of the day. I do lift her out of the coop early afternoon so she can go for a poo, a drink and a snack once a day! Imagine 21 days without!! In the little while she is out and about, it's like she goes through her usual daily routine but at high speed so she can return to her nest as soon as possible. She gets to the corn and water quickly, she rushes around from one place to another, at times looking like she is a little disorientated! She has a quick dustbath and rushes back to the coop.

Not content with the six eggs that I have given her, she also steals the other hens' eggs when they lay next to her in the nesting boxes. Only the eggs laid on the shelf above her, I manage to get my hand on them! Now that we have marked the fertile eggs, it is easier to see, each day, which eggs she has stolen and put under her! I can take those when I lift her out and leave the rest.