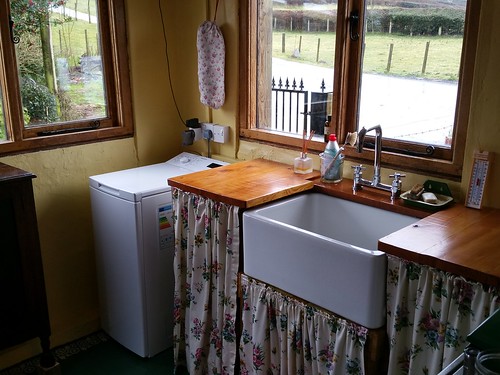 When we moved here, we decided that the first room in the house that we wanted to revamp was the utility/laundry/boot room. Pretty much the only space that needed updating and make more functional for us.

It's off the kitchen with a door to the outside and two windows that cover most of the walls. It's a single-skin building so it gets cold in winter and hot in summer. It had some floor units in a sort of L-shape and a sink. The room housed not only the washing machine but also all the meters and inverters to do with the solar panels and wind turbine. It was also a space where we took off our boots, wellies and coats and the floor was actually carpeted.

We started by removing the carpet, some of the units and then the sink. That was in the Winter of 2015 / Spring of 2016! We prefer to build things ourselves and purchase items second-hand, not only to save money but also to be kinder on Earth's resources. And this takes time... we looked for a Belfast sink for a good few weeks before we got one on Ebay that was local to collect. Later on, we got a tap, also a second-hand online find. I found some pretty vintage curtains that I liked and then began to imagine what the room would look like around the colours of that fabric. The project started and stalled a few times when other things on the to-do list became more important, as they do on a smallholding! Peter also needed time to think about how to construct the units to accommodate a heavy ceramic sink... would the supporting structure be made of wood? or metal poles? or even bricks?... Meanwhile, we really missed the lack of sink and units in there for so long! There is only so much stuff that can be stored on the floor! However, it was also useful to experience the space as it was; it gave us time to see what worked, what did not and to observe how we naturally used the space. However frustrating, that period of observation (partly by choice but also self-imposed when other jobs become more pressing) is really important as it is easy to miss things when they’re done in a rush. We are learning to apply this principle to our smallholding life – and to hold back from rushing into things.

This little room, added on to the house at some point, is a multi-use space... laundry room (clean clothes)... boot room (dirty shoes)... coat room (wet, drippy raincoats)... electricity room (Peter did not want the meters and inverters hidden away for obvious reasons)... storage for cleaning things, brooms, small hoover etc. So we wanted to accommodate all these functions but also make the space attractive and pleasant – rather than a place for dumped things. I wanted it to be organised but also quirky – that’s my style!

We did intend to replace the door to a more substantial one (this one has lots of single-paned glass in it) but we haven't been able to find a second-hand one that fits the space - yet. So, for now, Peter has removed some of the glass from the bottom, replaced them with wooden panels and given the whole thing a lick of varnish to spruce it up and preserve it for longer.

Peter eventually settled on building a chunky wooden structure to support the sink and the storage units on either side. He also made the worktop. We opted for no cupboard doors; instead, I turned the pretty curtains into fabric fronts to hide all the storage, country chic style! I love vintage items that I can upcycle or display (old objects tell stories, don’t they?) and over the years, I have acquired some special pieces that I adore. Amongst them is an old washboard made of wood with a beautiful patina and a glass panel. In re-doing the utility room, I had found the perfect place to display it: on a little shelf above one of the windows that Peter had constructed in the first few weeks of living here. There was also a very pretty edwardian tablecloth that I had bought to dress one of the tables for our Silver Wedding party in 2016. It was huge but sadly did not fit our dining room table so unfortunately would not get much use. I decided to turn some of it (the long edges with a pretty crochet trim) into pelmets above the windows and the rest (the middle bit) on the door.

I gave the room a lick of cheery and warm yellow emulsion and refreshed the ceiling with a coat of white. I then painted the floor with green garage paint and had fun with adding a stencilled border all around the floor. I found an old lampshade frame (I think it belonged to a lamp base we broke) and dressed it with strips of matching fabric and ribbons. I then attached a floral metal wreath that was meant to go on the wall outside. It was perfect to be re-purposed in that way though!

I think we have succeeded in combining the functional and practical with the quirky and pretty in our revamped utility/laundry/boot room. It is a real expression of our skills put together and we like the space we have created. It feels good that the project has now been completed and we look at the before and after photos with a delightful sense of achievement. So satisfying to cross something off the to-do list, especially after the job was added to the list over two years ago! 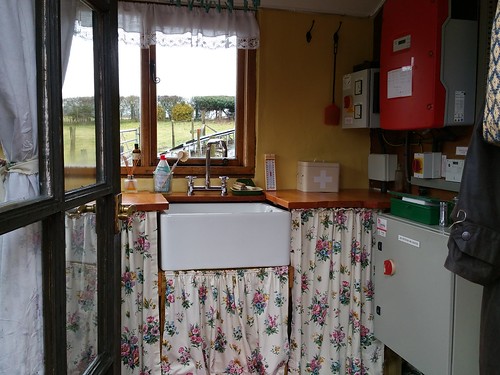 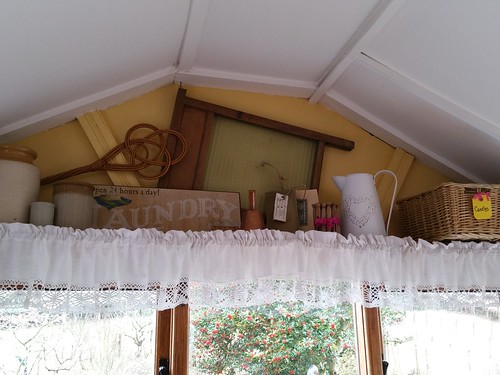 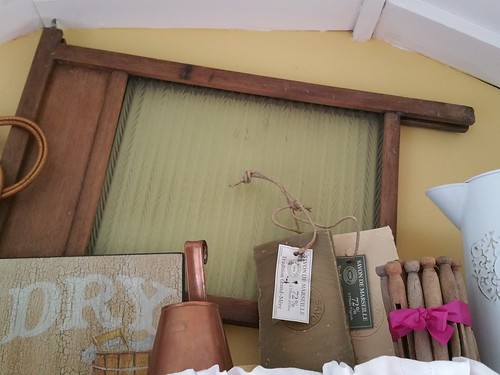 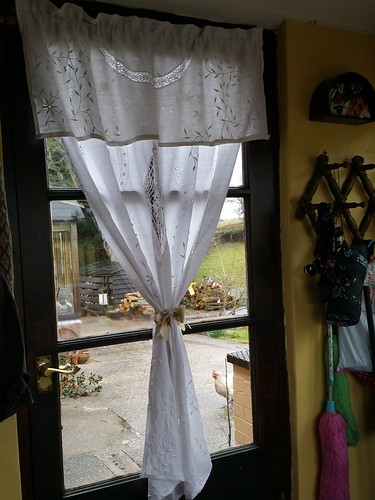 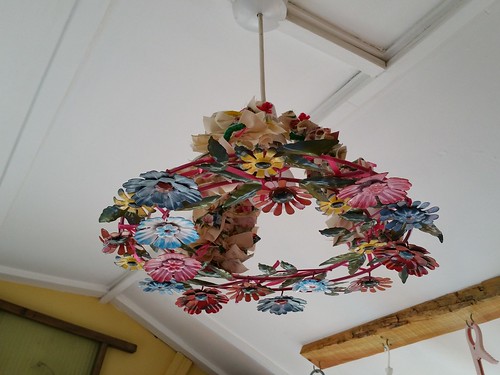 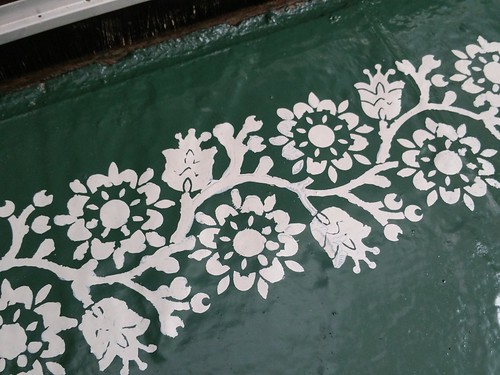