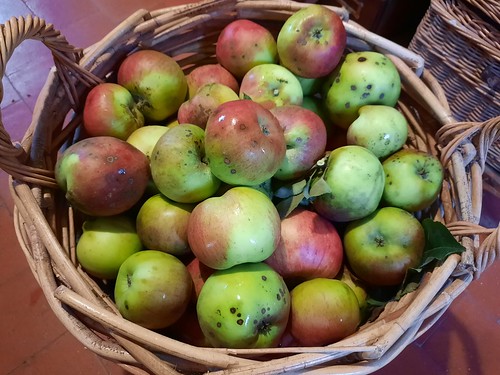 This year has been a good year for apples, so it would seem. Our trees have been laden with them and our trusty cooking apple tree (possibly a Bramley) has produced baskets of large red and green fruit. We have now harvested them all and are slowly going through the many crates filling the floor space in the kitchen. We daren't light the woodburner in there so as not to spoil them before we have a chance to process them.

Today is Apple Day and I thought I would make a contribution to this 30-year old autumn celebration by giving it a mention in our blog because the event goes further and deeper than the apple harvest itself. The first Apple Day celebrations were started by the organisation Common Ground in 1990 in the old Apple Market in Covent Garden in London where thousands of people visited the stalls of apple growers, tree nurseries, juice and cider makers, writers and illustrators. When I read about the event, I discovered that apples had not been sold in that market for 16 years before that. Not only did the day itself turn out to be a huge success, it has also been the catalyst for the creation of community gardens and orchards, farmers' markets and a coming together of people interested in localised food systems as well as land and natural resource use. A wonderful symbol of change through positive action, Apple Day has now become an Autumn tradition celebrated in many cities, towns and villages throughout the UK, in a variety of creative and inspiring ways. Maybe some of you have been to one in your area?

In an age when it is so easy to be disconnected from nature, our food sources and one another, Apple Day events are important at bringing communities together and raising awareness about the relevance of orchards in our culture and landscape and the provenance of our food. It is worth knowing that, over the last few decades, two thirds of British apple varieties have been lost in favour of just a few cultivars as a multitude of small orchards have been either abandoned or ripped up and replaced by vast commercial orchards to suit the supermarkets. Despite all this, the UK imports a huge proportion of the apples we eat, which I find astonishing!

We inherited a lovely orchard here on our smallholding and we are developing it by adding new fruit trees each year. Some of our apple trees are old so we are looking to the future by planting new ones. Our newest addition is a Tanat Revive which we planted last year to celebrate the wedding of our friends Guy and Juli. It was grown by friends of theirs over in the Tanat valley near Llanrhaeadr, grafted from an ancient apple tree they have growing in their garden. Guy and Juli had their wedding ceremony there so it feels very special that we are now growing "their" tree on our land, our gift to them. I look forward to Tanat Revive producing its first apples in a few years' time as I know that biting into its apples will be sweet with memories of our friends' wedding.

Hundreds of stories exist about apple tree plantings such as ours with Tanat Revive, all meaningful to someone, somewhere, all as unique as the different varieties of apples found in old orchards. Small, independent tree nurseries who grow a diversity of rare heritage varieties of apples, all rooted to the local history, are the guardians of these stories and are worth seeking out. Such trees, with a name and links to a place, make the fruit all the more special and tastier because a relationship has been struck with it. A far cry from the bland and uniform apples wrapped in a plastic bag picked up from the supermarket!

Our own Apple Day is more like an Apple Month as we process our bountiful harvest. We have just been lent a juicing machine and we have made about 10 litres of apple juice so far, which we store in the freezer in old pint milk bottles. Peter has two batches of apple wine on the go at the moment. We have enjoyed tucking into freshly baked apple cakes and I have made apple pies and turnovers for the freezer. This year, with the addition of a dehydrator to our farmhouse kitchen, I have experimented with apple and cinnamon leathers and dried apple rings and I can confirm they make tasty snacks. A few apples have also gone into homemade mincemeat. We have given plenty away and it's a real pleasure to share these delicious fruits with others who appreciate them as much as we do. We also leave some for wildlife and blackbirds in particular are love to peck our windfalls.

A bountiful harvest and the resulting full pantry is certainly cause for celebration. Yet, Apple Day goes way beyond the fruit... it celebrates orchards, their heritage, diversity and importance to ecology, the land and the environment. It celebrates nature. 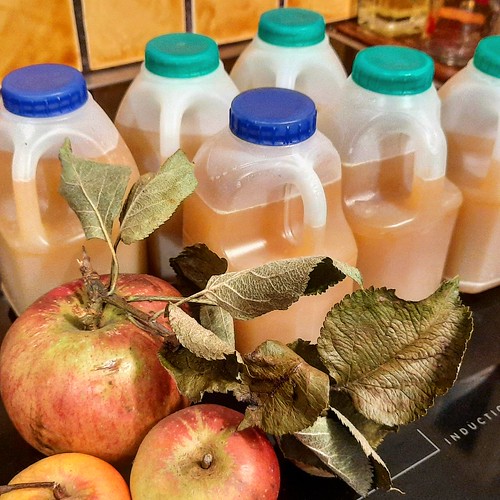 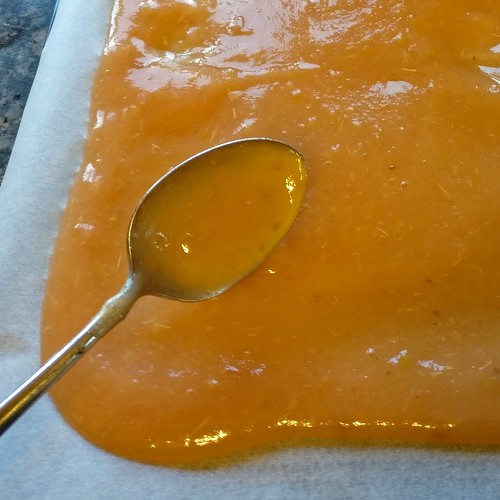 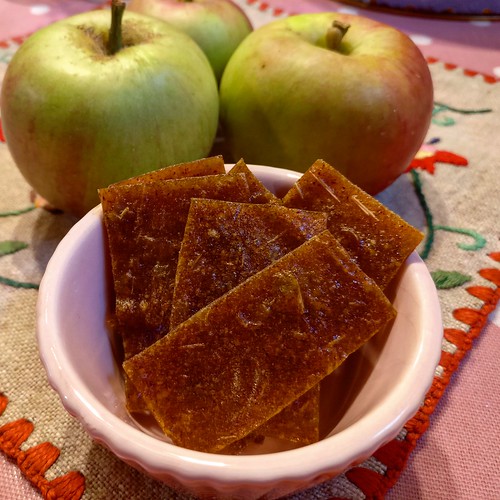 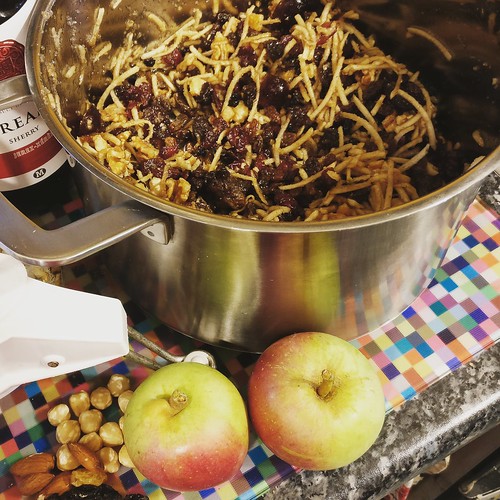 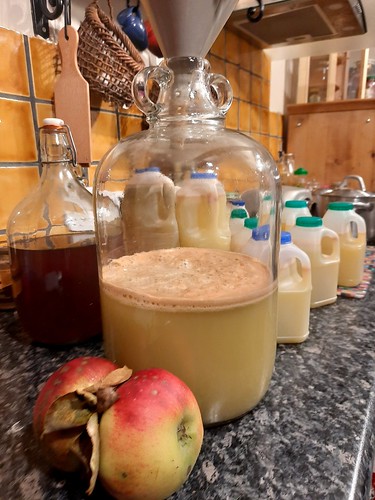