Lambskins... they're back from the tannery 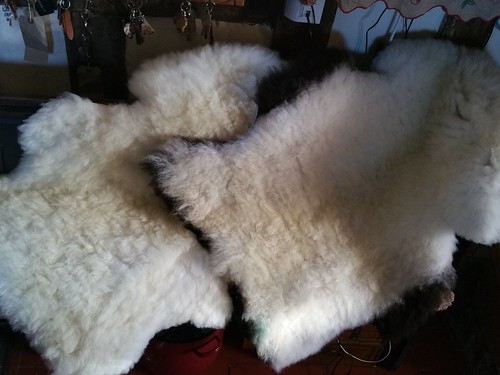 When we sent two of our lambs to slaughter in September, I brought back their skins so I could have them made into rugs. They came back from the tannery this week and they are gorgeous!

Lambskins are a by-product of having a lamb slaughtered for meat and usually they are not returned to the producer. Some abattoirs send some to tanneries for them to be processed into rugs but most are thrown away. When we were thinking about keeping sheep and raising lambs for meat, I thought it was a waste and I looked into rug making from lambskins. A chance conversation on Twitter led me to fellow smallholder Becci across the border in Church Stretton who talked to me about her experience of bringing the skins back from the abattoir, salting them at home before sending them to the tannery to transform them into lush rugs. I bought a couple of lambskins from Becci's Shetland sheep for our shepherd's hut and thought they were fantastic. I was inspired to give it a go myself.

As a skin is considered as an animal part, I needed to obtain a license from Defra in order to be able to transport them back from the abattoir. The license is easy enough to have done and when we got to the abattoir, I presented it and they released the two skins after the lambs had been slaughtered.

There are not many tanneries around these days; it is very much a dying trade. Nonetheless, I was happy to discover the nearest one to us, Organic Sheepskin near Hereford, was the only registered organic tannery in the British Isles (I believe a new one has opened in Carmarthen since). I liked that they used only organically certified processes rather than chemicals to tan the skins. I contacted Nicki at Organic Sheepskin when I was doing my research and gathering information and she kindly sent me instructions on how to deal with the skins between abattoir and tannery to ensure the skin gets to them in the best possible condition. This involves salting the skins to preserve and cure them.

I bought several bags of salt in advance and as soon as we got back from the abattoir, I laid the skins flat on a table in the garage, wool underside and applied a layer of salt on them. As instructed, I shook it all off a couple of days later and applied another layer, which stayed on for several weeks. Early in November, as we were travelling down to Wiltshire, we made a slight detour via the Herefordshire tannery and delivered the two skins for Nicki to work her magic.

I heard last week that they were ready and had them sent back to us via courier. The parcel arrived yesterday: two fluffly, thick and luxurious rugs from our first ever lambs. They are very special indeed and I will treasure them. 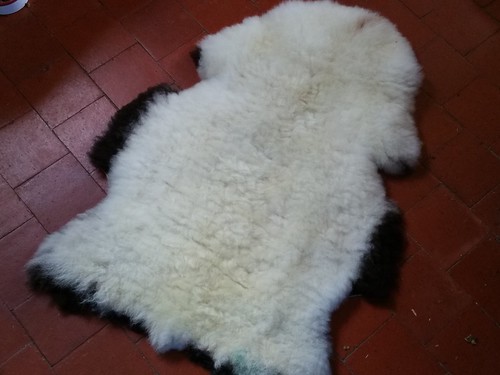 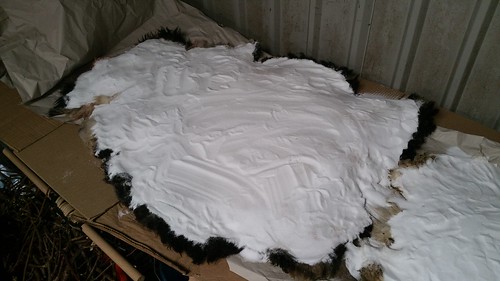