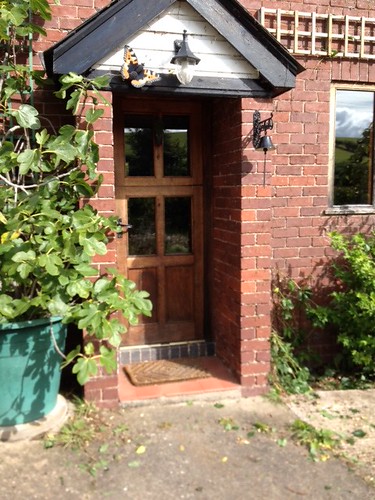 Well, that's it! After a hectic and exhausting few days, we have moved in and our life on a smallholding in the Welsh hills begins here.

The move was uneventful, only a lot of work with packing, emptying and cleaning at one end and unpacking at the other. Peter left Salisbury very early with cats Lola and Oscar, who were very reluctant to get into their carriers! They had a surprisingly good journey and, at the house, Lola and Oscar began exploring their new surroundings. We have been advised to keep them in the house for about a month before letting them out. This will be challenging!

We completed both sale and purchase very promptly at around 11 am. Our removals were just finishing to load up and I was doing the last of the cleaning up. The three removal vans, full of our possessions, from little to large, went on their way. A few moments later, the new owners' removal vans were turning up outside. Some neighbours popped in to say goodbye with cards and gifts, which was touching.

I felt a mixture of joy and sadness, all at the same time. A little overwhelmed, I grabbed a hug or two from my friends Joy and Peter and we shared a cup of tea before I set off to Wales.

It was a long journey of nearly 7 hours... Friday afternoon traffic plus roadworks meant the journey was nearly twice what it should be. And Peter was already at the new house and I felt very jealous!

Arriving here was a little like arriving at a holiday cottage, albeit a very empty one! It was not until the removals arrived with our possessions the next day that it all became very real! This is now home.

The settling in begins...