Off to pastures new... 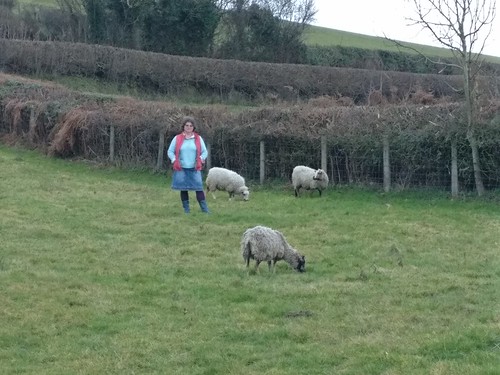 You may remember, dear readers, that we decided last Summer to no longer keep sheep, after a tough lambing season forced us to re-evaluate our priorities. Whilst it was a difficult decision to make, one over which we agonised for several weeks, we felt ready to take the smallholding in a different direction. Last Sunday, after eight months of trying to sell them, our three Shetland ewes went off to pastures new.

Eight months seemed like forever and at times, we felt the odds were stacked against us! First, Summer 2018 was very dry and people were not buying extra sheep, not knowing if they could feed extra livestock. Not wanting to lamb this Spring, we did not put them to the tup in the Autumn, which seemed to limit our chances to sell. Folks seem to like to purchase in-lamb ewes! Then, we found that smallholders particularly interested in buying Shetlands were selective about the markings and the quality and type of wool, which meant that advertising within the Shetland keepers and breeders did not bear the fruit we wanted. We also wanted the three to go together for their own welfare; they knew each other well and with no other sheep here, leaving one on their own was not an option.

We waited and waited... putting adverts on what we thought were the right forums but we did not receive any single enquiry, no-one was interested in our sheep! We talked to lots of people and asked people to pass the word around... We heard one of our "neighbours", who already has some Shetlands just down the road from us, may be interested. We called round and he said he would come up to see them but he didn't... We had to put our plans for more tree and hedge planting on hold during the Winter because we wanted to avoid the hard work of making saplings sheep-proof.

Finally, out of desperation, we placed an advert on Preloved. It seemed like a strange forum to advertise our three ewes (we didn't think of them as a second-hand car or piece of furniture that someone would want to buy!) but someone we know had successfully sold some of their sheep on it. We received an enquiry the day after placing the advert! A phone call later, to ascertain the suitability of the propective buyer, and the deal was done! Some adult children were buying them for their mum's 50th birthday! We exchanged a few emails with relevant information about their smallholding, payment details and before we knew it we were rounding up our little flock for the last time!

Last Sunday, we loaded them into the trailer, which they obliged with no problem, and we drove them to their new place, a smallholding on the South Shropshire/Worcestershire border where, to our surprise, they had a Shetland ram waiting for them.

As our Shetland ewes begin their new life with new keepers, so do we begin the next phase of our life on our smallholding. We squeezed in a quick purchase of 30 rowan, cherry and silver birch saplings from the Woodland Trust and we planted them at the weekend. They have joined the ones we planted 3 years ago as we started the creation of our woodland. It has only been a week without sheep and already, as we add trees and hedges and remove fences, we see how the land will transform from grazing fields to, in time, a lush landscape with increased biodiversity that will benefit both flora and fauna and the whole planet at large, even in a tiny, individual way. 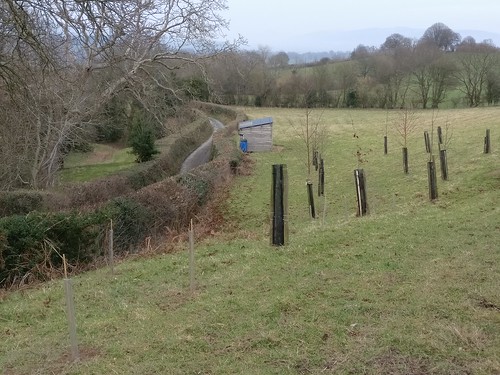