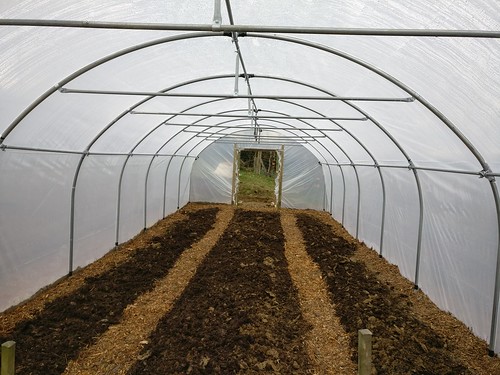 Our new polytunnel is now up and ready! By the end of January, we had added several trailer loads of sheep and cow manure to the soil and mid-February, we spotted a window of opportunity to put the cover on when the weather forecast showed a good few days of sun, warm temperatures and no wind. We gathered a few helpers on Valentine's Day (how romantic!!!) and by the end of the day, the polythene cover was secured on the frame and the doors were fitted. Peter has done a great job with an additional trench and a pond to help with drainage and we have started building a woodchip path up to it.

Last weekend, we rotavated the ground. We did so reluctantly, because we practise No-Dig here and digging the manure into the soil goes against the gentler, kinder to earth way of gardening that we choose to do here. However, the work to level the site with the mini-digger in December had compacted the ground there and the clay needed breaking up a bit before we could start to sow and plant in it. We hired a rotavator for the day and gave it a go, hoping that the action of cultivating the ground caused only minimal damage to soil life, already rich in worms that came with the manure. We plan to keep adding several inches of compost regularly to help improve the soil condition over time.

We created three beds the length of the polytunnel; one wider in the middle and two narrower ones on the sides. We added woodchip to form the paths and the space is now ready for the growing season.

Which is just as well because the section for March in my box of seeds is bursting! Ready, steady, grow!