A (not so gentle) introduction to hen keeping 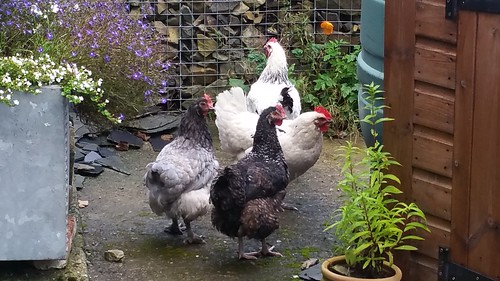 Two weeks ago, we purchased four hens and their coop. Their keeper, from just over the hill from us, was moving away into rented accommodation and could not take them with them. We collected the coop first and got it ready for the hens. Betty, a Splash Maran, and her brood (a Light Sussex, a Speckledy and a Blubell) arrived in cardboard boxes at night time and we transferred them into their own coop but at their new location at ours. They made a little fuss but quickly settled in for the night.

The next morning, I let them out of their coop and, after a quick feed, they began to explore their new surroundings. I watched them as they made their way from one place to another, from the lawn to the compost areas, the front of the house... they even nearly went in the house! I wanted to observe them to learn from them and also I wanted to watch for our cats' reactions to them. Lola and Oscar seemed curious but kept their distances! Betty and the others came close to me as I gardened, scratching the soil for worms and such likes. They particularly liked the area under the sycamore tree where we keep our compost bins as the are is dry with lots of leaves to faff with. It is also quite sheltered there and they made their little dust baths. We really wanted them to be free-ranging around the smallholding as that was what they had been used to in their last place. Hens can cope with going from little space to big space but not easily the other way round! At around 6pm on their first day with us, they took themselves in to their coop ready for the night. The next morning, I found an egg and was thrilled! Sounds idyllic, doesn't it?

I knew adding hens to our smallholding was going to be a steep learning curve. I got some advice from other poultry keepers and I made my way through a pile of "Your Chickens" magazines that I was given about 2 years ago! But nothing could have prepared me for what happened in the afternoon of their second day: they got attacked by the sheep dogs next door! I was indoors at the time and heard a commotion that made me come outside and there, the violent scene was happening in front of me! Two dogs, four hens... It didn't look good. My screams alerted my neighbour who immediately called his dogs back. I could see one hen down on the path; she was still breathing but had lost a few feathers and I expected the worst. Poor Betty! The neighbour helped me look for the other 3 hens. Two were easy to find, in the hedge and they did not take much persuading to find their coop for safety. Peter came home for work early and it took us another few hours before we found the 4th, who had also gone to hide. I was worried about her being injured because I had seen her being grabbed but she got away when the dogs were called. We eventually found her under a bed of comfrey and we then put her in the coop with the others. Meanwhile, whilst the neighbour and I searching everywhere for that missing hen, we saw that Betty had got up and taken herself under a bush. We picked her up and gave her a quick check but could not see any visible wounds. We gently placed her with the others in the coop.

What an afternoon of shock and trauma! I was very shaken and scared. I did not expect such a harsh experience. Of course, I knew that foxes are a risk to poultry in the countryside but this was different because they were dogs that should have been kept under control! They are used to chasing pheasants and the hens had been very near the fence with the neighbour, in their favourite spot under the sycamore tree. The dogs had got under the stock fence, through a gap that we did not even know was there.

Betty did not come out of the coop at all the next day and I brought water and a few tomatoes to her. She drank and pecked a little. She was in pain as she could not hop onto the perches. The others came out a little but quickly going back in. And so this went on for a couple of days. My anxiety levels were high and still traumatised by the whole thing, just the sound of a pheasant was enough to trigger a panic attack. I even dreamt that a fox had cleverly open the coop latch at night!

We have, since, made the area secure by adding fence panels so the dogs can't see the hens, there at least. The risk is still high because the neighbour is not going to start keeping his "working" dogs on a lead! Time will tell as to whether he will be more aware of the dogs' whereabouts. At least, he only farms there - he lives somewhere else - so the dogs are only there when he is. Which is daily for not all day. I am still very nervous when I hear that he is around and my confidence has taken a knock. It's only been two weeks so I hope that in time, I can settle more into having hens and trust that the neighbour will also keep a better eye on his dogs.

We have also been kindly given a run and coop for use during the day time, when I am not at home or when I can't be minding the hens. So I have set up a little routine: I feed them in there in the morning when I let them out of their coop and leave them there for a bit. That seems to be working and they go in their "day creche" willingly. I get some peace of mind! When out of the run, they don't venture very far at all. Preferring to stay close to their coop, under some bushes at the back of the house. The weather has been challenging too, very wet and windy so there they shelter in the dry. I had found another egg the day after the attack and I think it must have been in transit already because they have now stopped laying!

Slowly but surely, we are all recovering from the traumatic ordeal. The hens are very wary, which is no bad thing as they are more likely to spot danger. We have noticed that they work as a team and take it in turns to guard the entrance of the coop as they go in their place of safety at dusk. I still flinch when I hear them cluck a little louder than normal; I am still on edge when I hear a quad bike coming near the house (that means the neighbour is about with his dogs on tow!); I check on them often! The world of livestock keeping can be harsh sometimes and reality can burst our bubble of idyllic bliss in seconds! 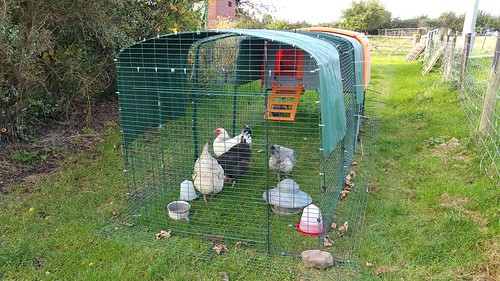