Mourning the loss of a pet 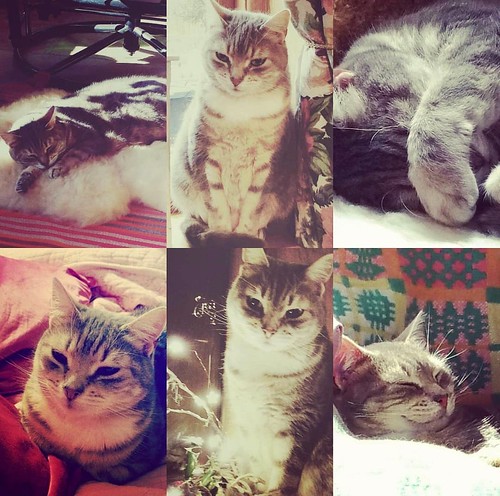 One month ago today, very suddenly and unexpectedly, we had to say goodbye to our beloved Lola. She got hit by a car and sadly, she did not recover from the internal injuries she sustained. It feels a part of us has gone with her and we are grieving.

At the end of a very difficult day, our neighbour had called round to help us with a newborn lamb in trouble (but that is another story!) and both cats had been playing under his car. I suspect Lola took it a little further and climbed either on the wheel or up in the engine itself although we don’t really know what happened. When the neighbour left, I quickly glanced underneath the car but could not see the cats so assumed they were no longer under it. In any case, I could trust them, when under cars, to quickly run away when the engine would start. Unfortunately, I then heard a thump and Lola ran by me down the drive. I did not really make anything of it, if only that I assumed she was ok, as I was already preoccupied with the weak and poorly lamb and the logistics of moving him and the ewe inside for the night as he was too vulnerable to be left in the field overnight.

Unfortunately, Lola was not ok and we found her collapsed by the cat flap. Peter scooped her up and looked after her whilst I was settling the ewe and lamb inside. We could not see any obvious signs of injuries and to start with, we thought she was just in shock. She got up at one point and it was then that we saw she was dragging her back legs so we both knew it was not looking good. Sadly, she took her last breath a while later.

Lola was 7 years old and she and Oscar had joined our family when they were 7 weeks old. She was a good mice catcher. In fact, the night before she died, Peter and I had watched her for ages trying to catch a mouse in the garden. She was a nervy cat at times, especially with people she did not know, and she had some issues around food (not too surprising as she had been found abandoned and starving as a tiny kitten). She also overgroomed so had removed all the fur under her belly! She used to seek me out during the day and would follow me around and miaw till I sat down - her way to ask for a cuddle. She would climb on me for a stroke, her purring on my lap was so soothing and relaxing. Those moments of closeness with her and with myself through her have now sadly gone. Seeing empty the chair where she liked to snooze during the day brings tears to my eyes.

Not only are we missing her, her presence and her cuddles but she has taken away with her a bit of our connection with our family life before we moved to Wales. We are grieving for her and for all that she represented too. That loss of meaning hurts too, a piece of us and our family life gone forever. Neither was it the end we had wanted for her... we imagined she would go on till old age but instead, her life was tragically cut too short.

Oscar was upset the morning after she died and he kept sniffing the cushions where she had laid. In his cat mind, he must have known she had died. Lola was definitely the boss between them and it is interesting that he spends more time downstairs with us now that she is no longer here. He sleeps in places he would not normally have been “allowed”, like on the Welsh blanket on the chair in the sunroom. Lola had made that whole space her own territory! Bittersweet is the gain that follows a loss, isn’t it?