New life on the smallholding 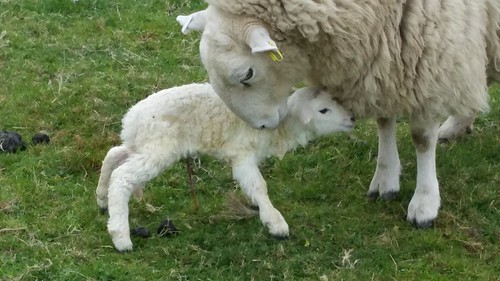 When we first got our ewes, 18 months ago, everybody was asking us what our plans were for them ie will we put them to the ram and have lambs from them. They were our lawn mowers so thinking about lambs was just not within our radar then. As novice sheep owners, there were plenty of new skills to acquire to look after them before we could even contemplate lambing! Besides, they were lambs themselves so we had another year to think about having lambs from them.

As time passed, we settled into looking after our ewes and Spring came, with an abundance of bouncing lambs in the neighbouring fields! The question of having our own lambs arose again and I thought that it would be useful for me to learn about lambing. Our kind and knowledgeable neighbours, Paul and Julia, invited me to pop up the lane to be part of their ewes’ lambing process and it was an amazing experience. I learnt a lot by observing, discussing, asking daft and obvious questions and getting close to the ewes and lambs at the birth. I got to learn about what was normal and what was not, which was really helpful.

By the time the Autumn came, time when ewes start to be in season, I had decided that we would have a go, despite Peter being less bothered, not keen on broken night's sleeps! Paul had offered us the loan of one of his Badger Face tups, a suitable breed with which to cross our Welsh Hills ewes, especially for their first time, the Badger Face being smaller in size with narrower legs and face. Taggy, our borrowed young ram, arrived to be with our ewes on 8 November. We put a raddle on him so we could monitor his activity: a crayon mark on a ewe indicated mating and would give us an approximate due date for lambs. For several days, there was no activity whatsoever! We were beginning to wonder if it was ever going to work! However, during the space of one week, he had marked all the ewes, which indicated that our six ewes’ reproductive cycles had probably synchronised and they were in season around the same time, which would mean that lambing would happen all within the one week, some time in April. It is not uncommon for ewes’ cycles to become synchronised with the presence of rams in neighbouring fields.

Taggy stayed until 2 January so our ewes would have had the chance to experience three cycles, each being around 17-18 days, during his stay with them. One ewe, Bonnie, got marked a second time, which means she did not fall pregnant first time. When Taggy went, we had our lambing calendar mapped out: 5 ewes due from 12-18 April and another on 30 April. Then, the waiting game started! First time lambers do not necessarily show any signs until very close to their due date. However, we did notice some getting bigger and on four of them, the udders started to change shape and fill up. We adjusted their feeds accordingly to meet the demands of growing lambs inside them, supplementing with lick buckets to ensure they were getting enough of the nutrients they needed but that they could not get from grass alone, in Winter/early Spring in very short supply up in the hills.

By the end of March, I had prepared a lambing kit with towels, bottles, colostrum, energy drinks, syringes, needles, lambing rope and even some Penicillin just in case. By then, some ewes were really beginning to slow down and around 4 days before the first one was due, we moved them to a field close to the house and I began 4-hourly night watches and 2-hourly during the day. Watching out for the tell tale signs they are about to go in labour: choosing a spot where to give birth, scraping at the ground, lip curling, licking, making noises, bag of fluid coming out...

At 7 am on her due date, Daffodil produced a ewe lamb, then another. It was a textbook lambing for her and my only involvement was to wipe the membrane off their nose and face as they were born to ensure they could breathe. Within a few minutes, the lambs were on their feet already searching for a teat. A magical experience to witness and one to give me confidence for what was to come. We called our first lambs Myfanwy (a nod to their Welsh heritage) and Kimmy (named by our son who, by then, was circulating photos of newborn lambs around his office in London!).

Two days before her due date, Flossie started her labour, just as I also had the task of keeping Peter out of the house as our children were arriving to surprise him for a special birthday. Their plan was to decorate the house with banners and balloons whilst he kept busy doing some fencing work at the shepherd’s hut. We just about managed it! Flossie’s labour took ages and I was beginning to wonder if I should intervene. Always such a hard decision to make. Eventually, with a little tug from me, she produced a big lamb, a girl, whom she licked clean and guided to her teats. Our daughter named her Gail. Two hours later, having put my lambing kit away thinking that she was having just the one lamb, another bag appeared and Flossie started to become distracted from her lamb and I could see another lamb was on the way, with one leg and a nose showing. I gave a little tug and a little twist (he was coming out with one leg back) and out popped a lamb that looked just like their Dad! Crossing our Welsh Hill flock with a Badger Face, we did not know what colour the lambs would be… white? With Badger Face markings? A mixture? We are aware that the Badger Face gene is recessive and we half expected all the lambs to be white so you can imagine my surprise when I saw that Flossie’s second lamb had dark leg and head! This second lamb was even bigger than the first and a boy. We called him Bryn. It is such a special experience to witness the vital bonding that happens as the lambs are born. The ewe is giving all her attention to her newborn, licks them and encourages them to find the teats. During those crucial first 20 minutes, a powerful bond is formed that ensures the lamb’s survival as mother and baby attach to each other and the lamb receives the all important colostrum from the ewe.

I still kept an eye on the other ewes to lamb, one was due the day before and another that day. And with visitors staying with us for the Easter weekend/surprise birthday celebrations, it was a busy time. The next ewe to lamb was Bethan. Unfortunately, her lamb was born in between checks that night and I found it dead, most probably suffocated by the membrane not having been licked or wiped off its face. It was a distressing discovery, which found us googling at 1 am what to do next! Bethan was distressed too and was calling for her lamb. Heartbreaking! It was hard for me to think straight and come up with solutions. By then, the lack of sleep since the week before was taking its toll! I stayed out with her for a good while to see if she was going to have another lamb but her afterbirth came out. By the morning, Bella was starting her labour. Bella is our wildest ewe so there was no chance she would let us near her. And if she had needed help, it would have taken a whole army to pin her down!! Binoculars were very handy to keep an eye on what was happening whilst keeping my distance from her so as not to stress her! As Bethan had lost her lamb, there was an opportunity to have a go at performing an adoption if Bella had more than one lamb. But it was not to be… Bella had a single lamb, a girl, that our children named Nessa. Bethan was distressed for a couple of days, calling for her lamb and going to the other lambs searching, evidently grieving. It was very easy for me to blame myself and going over what happened with plenty of “if only” but I know I did my very best. One neighbour said to me “you can’t be there all the time” and it was comforting to hear. Where there is life, there is death.

We have recently turned the family groups out onto our biggest field with fresh grass and lots of space to race, skip and bounce about. I enjoy spending time watching the lambs play, explore, cwtch with mum, even catch a sneaky drink off another mum! Their playfulness is such a delight to witness. They are full of bounce and aliveness. When I watch them, I connect with my inner child and my own playfulness and aliveness. So good for the soul!

So, there we are… five lambs now coming up to 2 weeks old. A huge learning curve and a transformative life experience for us. We still have two ewes to lamb. One was due on 18th but nothing happened so perhaps in 17-18 days from that date? Another is due on 30th. I have doubts these two are even in lamb as they have not displayed the same changes as the others, although they are getting bigger… more checking and waiting for now… 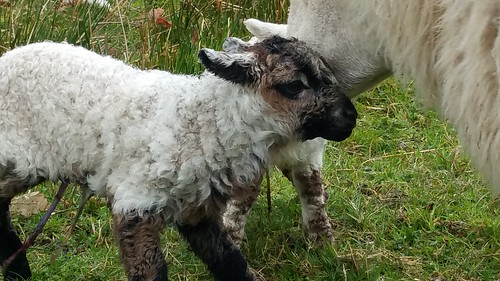 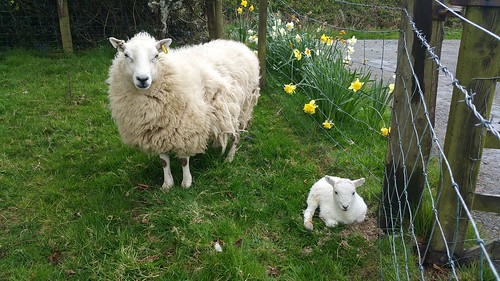 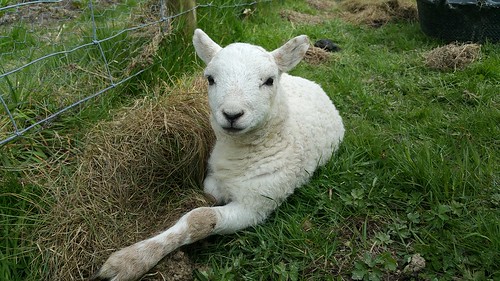 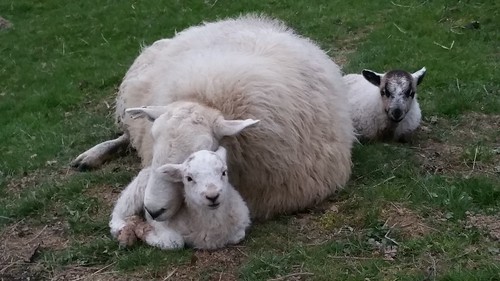 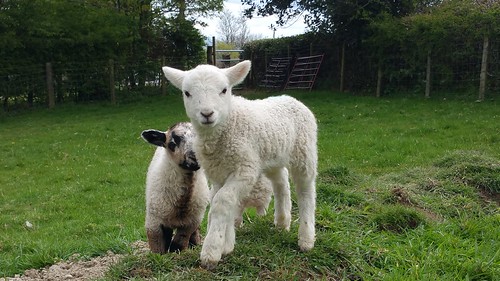